China’s Semiconductor Progress to Be Impacted Once Again as SMIC Becomes Sanctioned by U.S. Department of Defense, Says TrendForce

On December 3, the U.S. Department of Defense announced its latest sanctions against four Chinese companies, including SMIC, which is the leading foundry in China, according to TrendForce’s latest investigations. While the U.S. government had imposed sanctions on SMIC with the EAR (Export Administration Regulations), the DoD is now including the foundry on its list of Chinese military companies. Not only will this move threaten SMIC’s upstream supply of semiconductor equipment and materials, but its R&D of advanced processes as well as China’s attempt at semiconductor independence will also be severely impacted as a result. Furthermore, SMIC will be barred from receiving any U.S. investments going forward.

SMIC currently possesses three 8-inch fabs and three 12-inch fabs, all located within China, with a 230K/M total wafer capacity (12-inch equivalent), which the company is planning to expand. With regards to process technology R&D, since SMIC announced the kick-off of 14nm mass production in 2019, it has been focusing on 12nm, N+1, and N+2 processes this year, with N+1 mass production planned for 2021 and N+2 (approximately equivalent to TSMC’s 7nm process) mass production likely to take place in 2022. Nonetheless, the aforementioned schedules are contingent on whether SMIC can obtain the necessary semiconductor equipment and technologies from U.S. sources.

In terms of CAPEX, SMIC undertook its most active fab build-out and capacity expansion activities from 2Q20 to 3Q20 on the back of China’s policy-driven efforts at semiconductor independence. However, after the U.S. government applied export restrictions against SMIC via the EAR in October 2020, U.S.-based semiconductor equipment suppliers, including Applied Materials, Lam Research, and KLA, subsequently faced various restrictions, deferred shipment schedules, and other uncertainties in supplying equipment and materials to SMIC. As a result, SMIC was forced to lower its CAPEX from US$6.7 billion in 2Q20 to $5.9 billion in 4Q20 and slow down its capacity expansion in response. Even so, although classifying SMIC as a Chinese military company prohibits the foundry from receiving any U.S.-sourced investments, SMIC still receives significant capital from Chinese investors. Therefore, the latest sanctions will likely have a relatively low impact on SMIC’s CAPEX.

Most of SMIC’s clientele comprises Chinese IC design companies. In particular, earnings from China (including Hong Kong)-based and Europe-based clients accounted for 69.7% and 11.7% of SMIC’s total revenue in 3Q20, respectively. On the other hand, owing to the impact of the U.S.-China tech war and China’s semiconductor independence efforts, SMIC’s revenue share from North American clients substantially decreased from 33% in 3Q18 to 18.6% in 3Q20. The DoD’s latest sanctions, which restrict U.S. sources from investing in SMIC, will once again reduce the willingness of U.S. IC design companies to place wafer input orders at SMIC, thereby further lowering SMIC’s revenue from North American clients.

On the whole, TrendForce believes that the DoD’s sanctions are leveled primarily at U.S. investors, meaning they will have a relatively low effect on SMIC’s CAPEX in the short run. Regardless, if U.S. semiconductor equipment suppliers remain prohibited from shipping equipment to SMIC, the ensuing effect on China’s overall foundry capacities, advanced process R&D, and SMIC’s client structure will persist in the long term. As non-Chinese clients become more willing to redirect orders elsewhere, Taiwanese foundries, such as TSMC, UMC, PSMC, and VIS, will be the direct benefactors of the fallout. Nevertheless, as wafer capacities across the foundry industry remain fully loaded through 1H21, foundries that look to capture some orders that are redirected away from SMIC will need to do so after two or three quarters. At the moment, SMIC is actively partnering with Chinese clients for trial production in order to keep up its capacity utilization rate from 4Q20 to 2021. Should SMIC be placed on the Entity List in the future, these successful partnerships will lessen the impact on SMIC’s business operations and China’s foundry development. 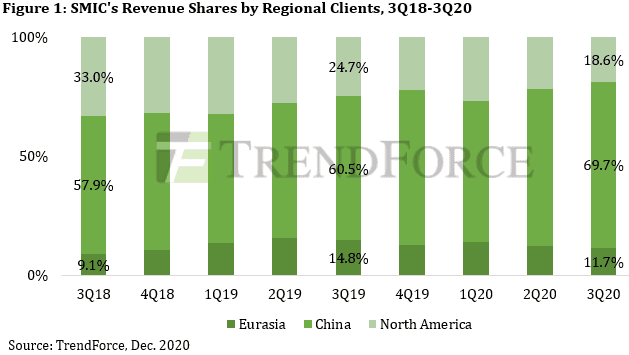