In 2021, the increase in transport prices was mainly driven by the rapid rebound in demand, itself favored by massive stimulus packages. This has created an imbalance in relation to the available supply and therefore a favorable balance of power for the carriers.

The rise in freight rates was also fueled by the impact, albeit partial, of the inflationary pressures, in particular on energy and commodity prices as a result of the V-shaped economic recovery. Central banks hoped that this overheating would gradually be regulated when supply and demand were rebalanced through the improvement in congestion and shortages caused by the Covid-19 pandemic. But the outbreak of war in Ukraine is totally upsetting the outlook.

Oil prices, which had already started to rise in 2021, have risen sharply in recent weeks due to the conflict between Russia and Ukraine. This increase is having a direct impact on freight rates.

Today, June 1st, containment will be lifted in Shanghai, after two months of lockdown. Residents will once again be able to circulate in low-risk areas, and transport, particularly by road and rail, will be facilitated.

At the port, the normalization of activity has already begun. Authorities report productivity at 95% above normal (although probably still much lower, according to less official sources), compared to 35% in April.

As mentioned above, the port congestion in Shanghai is easing: the average waiting time for container ships has fallen to 34 hours, compared to 66 hours at the height of the confinement.

However, ocean carriers have been executing bank sailings and diverting ships away from the Port of Shanghai and this is expected to create a backlog of containers that will impact capacity as the industry resumes normal activities.
Industry experts estimate that up to 260,000 TEU (Twenty Feet equivalent) of export cargo was not shipped from Shanghai during the past few weeks.
This number is equivalent to around 13 mega ships (20,0000+ TEUs each)

What to expect during the next few weeks?
With the resumption of production announced, port activity should heat up. An early peak season is expected starting in June and the companies have announced a crescendo increase in capacity until the beginning of August.
In Europe and the United States, port congestion could worsen, but global demand, and European demand, in particular, is slowing down.

Rates are stable but capacity is tight. In South China, flight capacity is still not recovered and there is a similar lack of demand as in North China. Trucking is still very limited. The overall market lookout is expected to be slow and soft for the next few weeks. 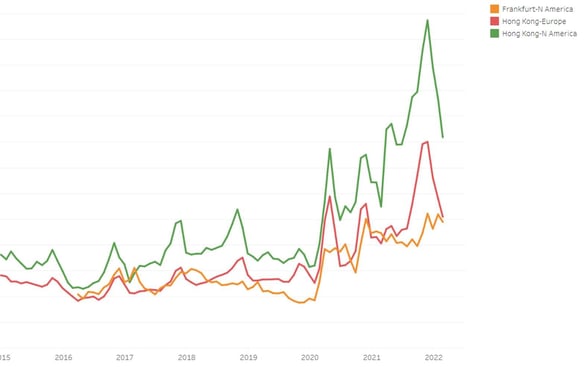