Chinese foundries forecast to continue to hold less than 10% of the total foundry market. 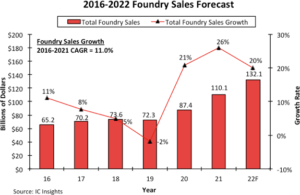 After dropping 2% in 2019, the foundry market logged a strong 21% rebound in 2020 as application processor and other telecomm device sales into 5G smartphones acted as strong drivers.  The foundry market continued its growth surge in 2021, registering a 26% jump.  If IC Insights’ 20% increase now forecast for the foundry market in 2022 comes to fruition, the 2020-2022 timeperiod would mark the strongest three-year growth span for the total foundry market since 2002-2004.

Nine of the top-12 foundries in 2021 were based in the Asia-Pacific region.  Europe-headquartered specialty foundry X-Fab, Israel-based Tower (now expected to be acquired by Intel), and U.S.-headquartered GlobalFoundries were the only non-Asia-Pacific companies in the top-12 ranking last year.

IC Insights believes that the total Chinese company share of the pure-play foundry market will remain relatively flat over through 2026.  Although the China-based foundries plan to take advantage of the huge amount of government and private investment that will be flowing into the Chinese semiconductor market infrastructure over the next five years (which became evident with the huge jump in SMIC’s capex outlays in 2020), it is unlikely they will be able to compete for leading-edge foundry business, especially considering that SMIC was placed on the Entity List by the U.S.  Combined, the Chinese foundries are forecast to hold 8.8% of the pure-play foundry market in 2026, a level that would be 2.6 points less than their peak share of 11.4% in 2006. 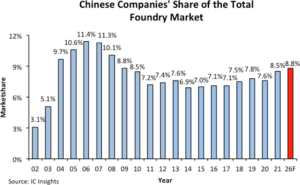 Shipments of TV Panels Are Projected to Drop by 2.8% YoY for 2023 as Sluggish Economy Affects TV Sales, Says TrendForce

2022 Will See a US$4.6 billion Global Spend on Industrial Digital Twins