Spending grows as NAND suppliers gear up to enter the race for 200-plus layer devices.

IC Insights’ capital spending forecast for the semiconductor industry was included in its recently released 1Q Update to the 2022 McClean Report.  The Update also includes a review and analyses of IC industry capacity, the Top-25 semiconductor sales leaders, the automotive IC market, and detailed forecasts for the DRAM, flash, MCU, MPU, and analog IC product segments. 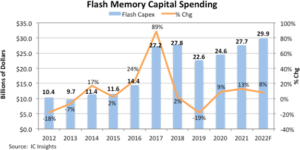 The $29.9 billion in spending represents 16% of the $190.4 billion in capital spending forecast for the total IC industry in 2022 and trails only the foundry segment, which is forecast to account for 41% of industry capex this year.

Through the forecast period, new fabs and new equipment will be needed as NAND flash suppliers gear up to enter the race for 200-plus layer devices starting at the end of 2022 and into 2023.  Samsung and Micron might be the first to start volume production of 200-layer devices later this year.  Both companies, and SK Hynix, are currently in volume production of 176-layer NAND.  Samsung’s wafer fab in Xi’an, China, is (and will be) a key manufacturing location for leading edge NAND with two fabs—each capable of 120,000 wafer starts/month when they are fully operational.  With an increased focus on enterprise storage applications, SK Hynix expects to migrate to 196-layers in 2023.

When will the chip shortage be resolved? According to TrendForce: 2H22